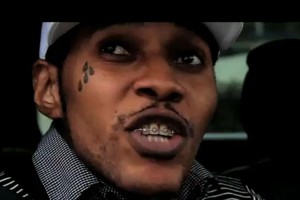 Breaking news: Vybz Kartel escapes from jail, is now Jamaica’s most wanted man We are getting reports that the dancehall star and alleged skin bleacher and multiple murderer Vybz Kartel escaped from prison at gunpoint and is now at large in the Kingston hills.

Vybz Kartel has allegedly staged one of the most audacious prison breaks in Jamaica history, and is now one of the Caribbean island’s most wanted criminals. The dancehall star was held at Horizon Adult Remand Centre on Spanish Town Road for several charges of murder and ganja possession.

According to dancehall magazine HypeLife At 1am this morning local time, Vybz and seven others held up his guards with guns smuggled into jail. One guard died of a heart attack, and 12 were injured, with the gang escaping with car keys and uniforms of their jailors, using a maintenance truck to break out of the prison yard.

Vybz, real name Adidja Palmer has been in custody since October 1 faces charges of murder, conspiracy to commit murder, and illegal possession of firearm arising from the death of Barrington Burton, a St Catherine businessman/promoter and the killing of Clive “Lizard” Williams in Havendale, St. Andrew this past August. He has also collaborated with Jay-Z, Rihanna, Missy Elliot, M.I.A, Pharrell, Lil Wayne and Eminem, may bleach his skin and was planning on launching a shoe line.

Adidja Palmer is currently at large, and the Jamaican force commissioner, who heads the Criminal Investigations Branch has placed him at the top of the most wanted list. Anyone with any knowledge of his whereabouts is encouraged to contact detectives at the Spanish Town Police Station, Kingfish at 811, Crime Stop at 311 or Police Control at 119.