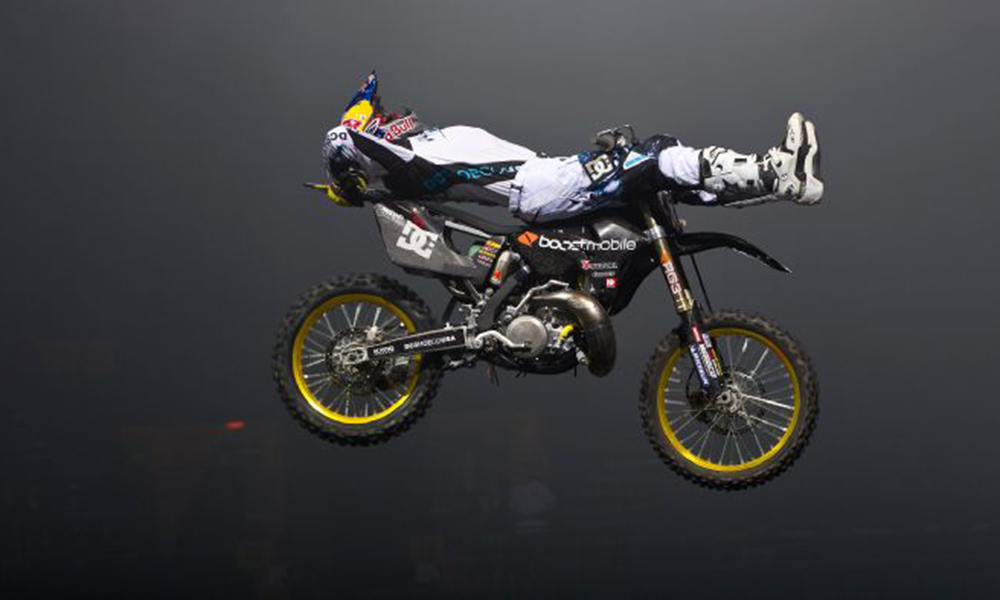 Travis Pastrana likes to make the most of any situation he’s in, and this week in particular has been loaded with big moments.

On Wednesday, he made it out to Los Angeles for the world premiere of “On Any Sunday: The Next Chapter” (he’s featured in the film, the follow-up to the 1971 motocross classic he credits with inspiring his entire life’s work) and officially announced the dates for the Nitro Circus Live 2015 North American tour, which he’s been trying to make his No. 1 priority. On Thursday he spent the morning at ESPN in Los Angeles promoting the tour, which starts in May.

Van Vugt has a list of her own and crossed a big item off it during filming for “Action Figures,” when she became the first female to land a double backflip on a BMX bike. Pastrana is holding on to a lot of his best footage for the final film but couldn’t help leaking that one for the “Action Figures” web series.

“There is, but it’s a secret,” she says. For ‘Action Figures,’ each one of us is going to have our own little section with some bangers. My double backflip is one, and then I have another banger in mind, something we’ll be filming in November. All I can say is that this one will be a motocross trick.”

For the “Action Figures” project, “bangers” has been Pastrana’s key word. Choreographed live shows are one thing, and he loves them. The heavily produced “Nitro Circus Live” series for MTV is another, and he loves that, too. But he missed the go-for-it vibe and anarchic spirit from the first Nitro Circus DVDs, when all he had to do was film some crazy tricks and shenanigans, with very little input from anybody but his closest collaborators.

“‘Action Figures’ is really about getting back to the grassroots of what we started with the earliest Nitro Circus DVDs, getting out there and just going wild,” Pastrana says. “Nitro Circus is just taking off so much, I’m dumbfounded. We have the global tours, the MTV show and all these other projects up in the air. I’d taken a lot of time off from it with NASCAR and stuff, just trying to focus on that, but somehow Nitro just kept growing anyway. It’s wild. This project felt important in the middle of all that, especially once I had a summer off and had some time to play.”
Van Vugt is quick to point out that today’s bangers are the foundation for tomorrow’s everyday tricks. That’s the nature of progression, Nitro Circus style.

“For me it’s not enough just to be the first woman to land the double backflip, even though those are the moments we work for in action sports,” she says. “I want to be able to land it every night on our next tour.”

Pastrana is the obvious ringleader of the Nitro Circus but says it’s more like a family than anything else, so much so that he married Lyn-Z, one of the stars of the show. The couple has been taking their daughter Addy on tour with them, and she’s already appeared in several clips from “Action Figures,” waterskiing and riding skateboards shortly after learning to stand. Pastrana feels just as much obligation to everyone else involved in Nitro Circus and says that motivates him even more to keep it growing, on every front, for everyone’s sake. Family is family.

“Travis, he’s like a brother to me, and I just can’t thank him enough for taking me along on the ride,” Van Vugt says, echoing the sentiment. “That’s one of the things I remind myself of every day, just the fact that I get to do this, that I get to travel the world with my best friends. We have the coolest jobs any of us ever imagined. Or, rather, we have the coolest jobs because Travis imagined it. Ten years ago none of this existed, and this is something we created because none of us could bear growing up and having real jobs. Now, I can’t imagine doing anything else.”