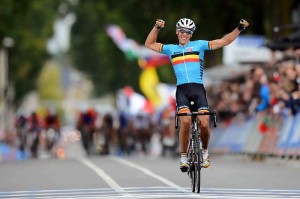 TO MARK 100th EDITION OF THE TOUR DE FRANCE

Oakley has teamed up with Europe’s leading sports entertainment group, Eurosport, to launch a search for two fit and motivated cyclists who will be asked to “Conquer the Road” to celebrate the 100th edition of the Tour de France in 2013. Cycling fans are being offered a once in a lifetime opportunity to ride one of the iconic Tour de France stages with a professional rider as part of a new campaign by Oakley.The winners will have their experience filmed and broadcast by Eurosport as part of a four-part mini-series called “The Ride” which will be shown during the channel’s 2013 coverage of the legendary race.
From Tuesday 9th April fans across Europe can enter the competition by visiting a digital hub developed by Oakley – conquertheroad.eurosport.com – and register their profile.

Using their own social media networks via Twitter, Facebook and Google+ the fans must then secure as many “kilometres” as possible through votes.

The more “kilometres” they earn the higher up the leader board they will go. Kilometres can also be earned by completing the different elements within the entry form.
To ensure entrants also have the physical attributes, votes will be awarded for kilometres cycled and recorded by logging in with strava.com a GPS tracking platform during the recruitment phase.Two lucky winners will then be selected to tackle one of the Tour de France’s legendary climbs alongside a former legend of the Tour and a current professional rider. One winner will ride Mont Ventoux and the other Alpe d’Huez.

Check out the digital hub here and sign up for the contest here: conquertheroad.eurosport.com