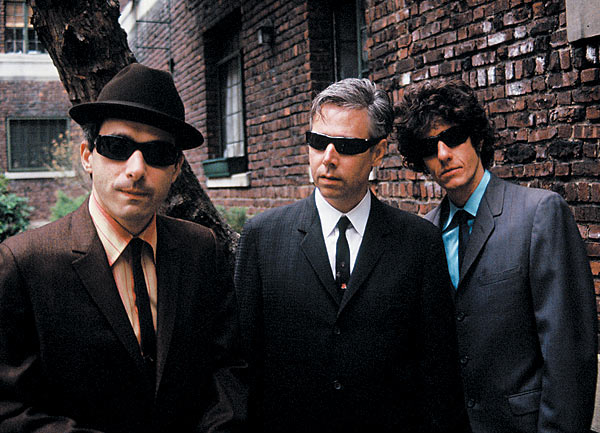 ILL COMMUNICATION REMASTERED DELUXE REISSUE IN STORES JULY 15
BEASTIEBOYS.COM PREORDER BEGINS JULY 6
“LEE MAJORS COME AGAIN” 7-INCH GOES FOR $105 ON EBAY
BONNAROO, ALL POINTS WEST, LOLLAPALOOZA, OSHEAGA, OUTSIDE LANDS & AUSTIN CITY LIMITS  FESTIVAL APPEARANCES CONFIRMED
HOLLYWOOD BOWL HEADLINE ENGAGEMENT SEPTEMBER 24
As announced by Mike D, Adrock and MCA themselves last night on NBC’s Late Night With Jimmy Fallon, the title for the upcoming new Beastie Boys album will be HOT SAUCE COMMITTEE. The band’s eighth album of all new original material will be out this fall, with an exact date to be confirmed shortly.
In related news, an extremely limited vinyl seven inch featuring HOT SAUCE COMMITTEE hardcore punk rave-up “Lee Majors Come Again” and an A Capella version of the new album’s “B Boys In The Cut” has been turning up golden ticket style in random copies of the recently released Check Your Head deluxe limited collectors vinyl edition. One copy was found selling for $105 on eBay–$25 above the list price of the original Check Your Head package in which it was included!
Additionally, the release date of the penultimate title in this summer’s deluxe remastered Beastie Boys series has been confirmed: Ill Communication will get the reissue treatment on July 14, with Beastieboys.com preorders beginning July 6.
Debuting at #1 upon its May 1994 release, Beastie Boys’ fourth album would quickly become an unstoppable force of nature, pervading every aspect of pop culture and public consciousness. Its charge to the top of the charts was led by “Sabotage” and its legendary Spike Jonze/Nathanial Hornblower helmed tribute to ’70s TV police dramas, as ROLLING STONE dubbed Ill Communication 1994’s “soundtrack for summer.”  Crowds and critics alike were equally and instantly floored by hip hop highlights like the opening “Sure Shot,” the classic Jimmy Smith homage “Root Down” and the Q-Tip collaboration “Get It Together,” as a VIBE cover story–the magazine’s first on a white artist–hailed Beastie Boys as “perhaps the most consistently innovative musicians to emerge out of hip hop.” It was a claim that Ill Communication would justify for years to come, as everything from the household name hits to instrumental favorites “Sabrosa” and “Ricky’s Theme” to hardcore punk workouts “Tough Guy” and “Heart Attack Man” remain B Boys staples to this day. And back then as now, Ill Communication’s impact and momentum showed no signs of abating.1995 saw Beastie Boys instantly sell out the Quadrophonic Joystick Tour, marking the band’s return to arena-headlining status. They continued to circle the globe as the record went multi-platinum, finally taking a break after the historic first Tibetan Freedom Concert drew 100,000 attendees over two days at San Francisco’s Golden Gate Park in June 1996.