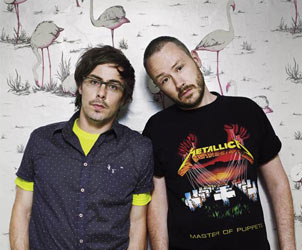 It’s been over three years since Basement Jaxx released their last album “Crazy Itch Radio” and a lot has changed in the time they’ve been away. What with indie guitar bands or solo female electro stars dominating the charts, Basement Jaxx seemingly find themselves as one-of-a-kind – a UK dance act with mass appeal, one whose  live shows have become a spectacle in themselves and whose records, whilst still retaining their experimental edge, continue to appeal across the board.

“Scars”, the band’s fifth album, is another masterpiece in the dance-pop spectrum. With a host of special guests including Yoko Ono, Sam Sparro, Santigold, Kelis and Chipmunk, “Scars” is as innovative in it’s sound as it is in its vision. Their sound still remains as urgent and as impactful as ever – there’s no need for Basement Jaxx to try and embrace any kind of retro outlook to their music.

From the Top 20 smash hit summer anthem of “Raindrops” featuring Felix’s twisted vocals, to the string-drenched, grime-esque title track “Scars” and the gorgeous “My Turn”, which features Lightspeed Champion on vocals, Basement Jaxx deliver an album that outshines any dance act in the UK.